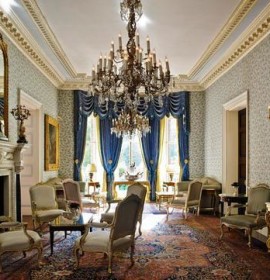 The Ritz, London is a  Grade 2 listed 5-star hotel located in Piccadilly  in London, England. A symbol of high society and luxury, the hotel is one of the world’s most prestigious and best known hotels. It is a member of the international consortium, The Leading Hotels os the World.

The interior was designed mainly by London and Paris based designers in the Louis XVI style , which is consistent throughout. Author Marcus Binney describes the great suite of ground-floor rooms as “one of the all-time masterpieces of hotel architecture” and compares it to a royal palace with its “grand vistas, lofty proportions and sparkling chandeliers”. The Ritz’s most widely known facility is the Palm Court, which hosts the famous “Tea at the Ritz”. It is an opulently decorated cream-colored Louis XVI setting, with panelled mirrors in gilt bronze frames. The hotel has six private dining rooms, the Marie Antoinette Suite, with its boiserie , and the rooms within the Grade II* listed William Kent House. The Rivoli Bar, built in the Art Deco style, was designed in 2001 by interior designer Tessa Kennedy, to resemble the bar on the Orient Express.